Sore Legs, Happy Bellies, The Marathon Du Medoc Lives Up To The Hype! 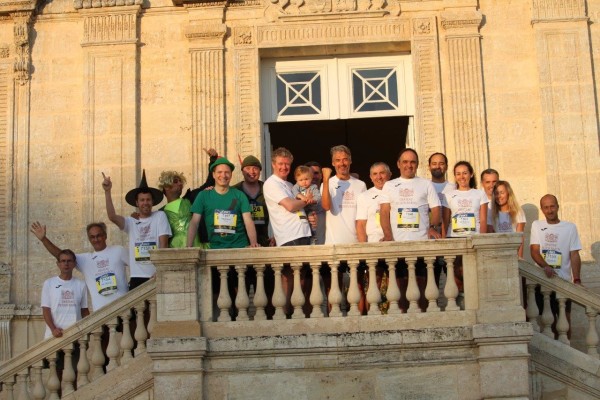 It’s ok boys and girls, we can walk again now. After the complete body shock of finishing our first ever marathon, we think we’re nearly there. As much as both Mike and JB trained hard before we did it, you can’t really train for the idea of running 42kms, having the opportunity to taste over 20 wines, eat oysters and foie gras, and do all this in ridiculous warm fancy dress outfits in 35 degrees heat. But what a weekend, eh?!

The theme was Fairytales and Legends, so JB – as he’s want to do – decided to find a couple of character where one of them meant he could dress in drag. Peter Pan and Tinkerbell? Sounds good! “Well”, he said, “Peter Pan’s ginger isn’t he?!” Nice one mate!
Mike has to say the costumes on display were awesome, wereckon 95% of runners were in fancy dress, with some just off the scale! Just an amazing, fun atmosphere all the way around.

Sun Gleaming Off The Stones

There’d been a slight rumour that there was going to be a bit of cloud cover, maybe even some rain. Looking back, that was probably just wishful thinking on the part of the wine makers in the region, all desperate for a bit of water on the grapes. Not a sight of it! We didn’t see a cloud in the sky all day. Running round your first marathon in 35 degrees is not easy, but to be fair, we’re running round 20-odd beautiful Chateaux whose walls and facades just POP in the sunshine. Absolutely glorious!

Within the first kilometer, we hit the first drinking station. Mike grabbed a quick snifter and kept running, although the technique of drinking and jogging was a bit beyond us. We were determined to have a few on the way round, but JB and I had to stop to do it. We’re blokes, we can’t multi task. Although we had to get used to jogging and drinking water. We reckon we got through about 7 or 8 litres, no problem!

Anyone who’s ever finished a marathon will tell you, finishing your first one feels amazing. JB hits “the wall” after 30kms, for Mike it was 35kms, but eitherway, the pain just hits and the legs turn to jelly. I-Mike even had to limit himself to just one oyster at the 38km stop! But running down the main drag of Pauillac, with Mike’s wife Linn and JB’s kids cheering us on from the sides was a great feeling.

We lucked out big time!!

Without question the biggest thank you of the weekend has to go to Christian, Ruth, Patricia and the all crew from Chateau Pichon Baron. We were stuck with where to stay, so a Friday night sleep in the Van Du Vin in the grounds of this glorious place was a god send. Staying over in one of the amazing rooms on the Saturday was a life saver. Getting to hang out with Pichon Baron’s running team (which included eventual marathon winner Freddy Guimard), eat great food and drink great Pichon Baron wines? Yeah we can’t even begin to tell you how lucky we felt. Thanks so much to everyone there!

Back Again Next Year

If you’d have asked us within an hour of finishing whether we’d do it again next year you’d probably get short shrift. But looking back on an absolutely unforgettable weekend, we reckon there’s not much stopping us from coming back next year, and this time with team 20h33!! If you fancy being part of it then get in touch with either JB or Mike and we’ll get you measured up for a costume!